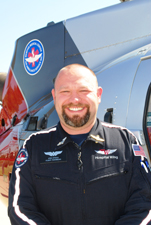 Josh joined Hospital Wing in January 2008. He began his career as a paramedic in 2002 and has served multi North Mississippi areas in EMS. he has also worked since 2004 at BMH-Memphis as a paramedic in the ER. he currently lives in Olive Branch with his wife, Alisha and daughter Kyleigh.